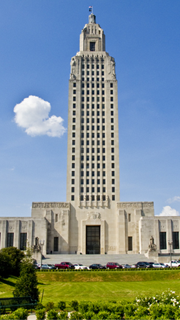 BATON ROUGE, La. – Politicians tend to disagree on many issues, but one issue they normally can agree on is funding early education programs. This is why advocates for sports betting in Louisiana are asking that the tax revenues generated by the activity be used to help the state’s youngest learners.

Louisiana residents have been traveling across state lines to place legal sports bets in Mississippi for almost a year now.

But, LA lawmakers are estimating that legalizing sportsbooks in their own casinos could provide an additional $40 million to $70 million a year for the state government.

When comparing that to the needs of the Early Childhood Care and Education Commission, the agency is estimating that the cost for continuing to operate their pre-k programs would be $86 million a year for the next 10 years.

While sports betting won’t completely solve the state’s education budget, state officials such as Senator Danny Martiny are viewing this gaming expansion as an additional way to help the sector.

Martiny plans on filing legislation at the beginning of April when regular session begins. The bill would allow sports wagering at the state’s riverboat casinos, race tracks, and New Orleans land-based casino.

Who May Support This Type Of Education Funding?

Louisiana Governor John Bel Edwards has shown previous backing for legal gambling on sports and has even mentioned that using the tax revenues for early education “is a conversation that I am willing to have.”

However, 2019 is an election year for the state and Governor Edwards is running for re-election. His focus on passing that potential legislation is unclear.

The implications of adding childrens education to the bill may also deter some from passing it, which is why Martiny may not introduce his newest proposal with that specifically written.

“We have people who are against dedications. The governor seems to be in favor of the dedication. I don’t know if you’ve noticed, but there are some people who won’t vote for anything that the governors for.”

Even if Martiny is able to get his bill to pass it would be some time before the state collected any funds from sports betting.

In October, local parishes would have to choose whether or not they want to host sportsbooks at their gaming establishments. The Gaming Control Board will also have to have to come up with official regulations before residents could start placing their bets.